Daytona Rolex : An In-Depth Review of The Series’ Iconic Models 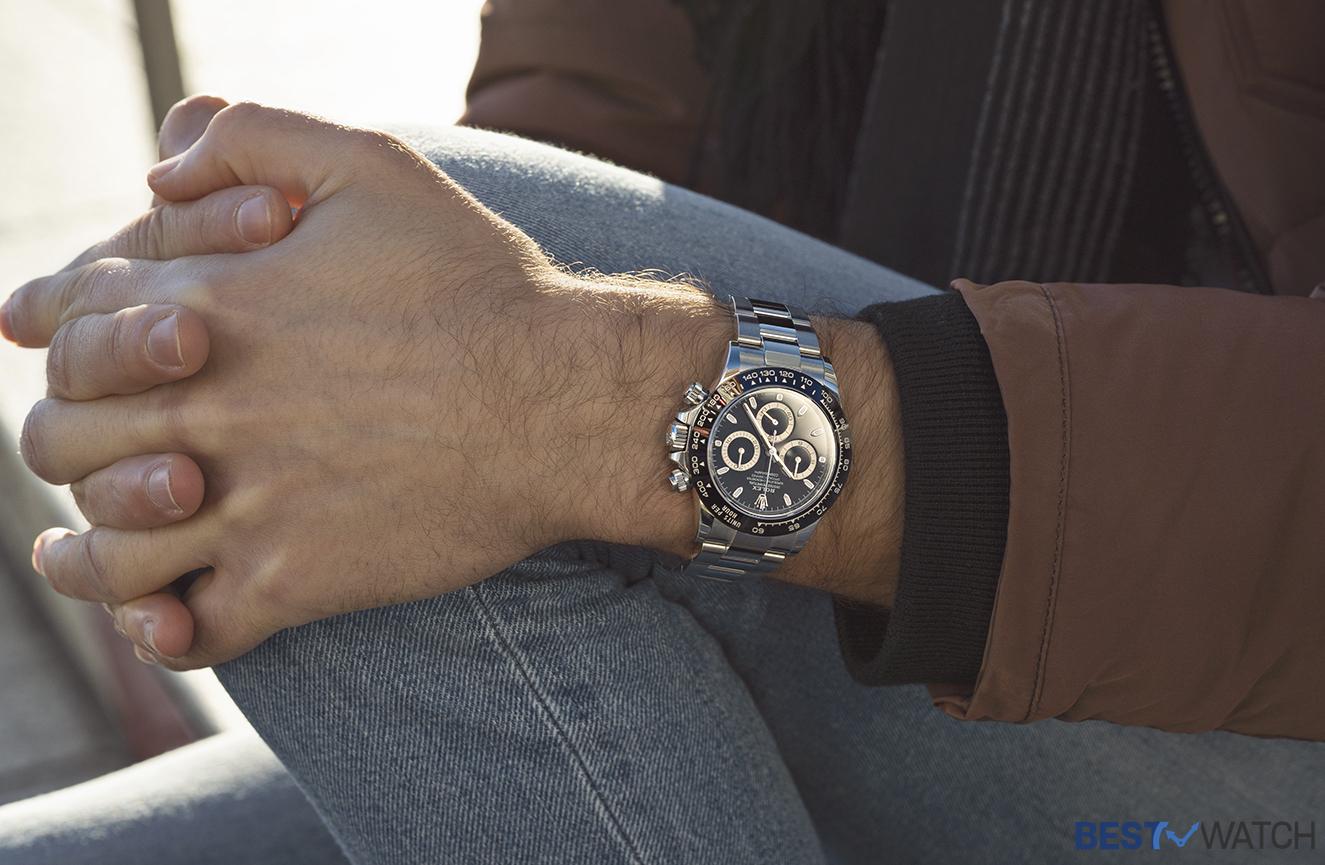 Daytona Rolex is the most admired mechanical luxury sports chronograph ever made. Named after the iconic Daytona Beach racetrack in Florida, this timepiece is an ultimate micro-engineering marvel dedicated to endurance motor racing. Introduced in 1963, Daytona is not the first chronograph watch to come out from the house of Rolex. The company has been producing chronographs since the 1930s. Many of the historical models are now highly sought-after by seasoned collectors.

Before introducing the Daytona collection, Rolex had produced a number of chronograph watches equipped with customized Valjoux movements. Among them, reference 6238 is known as Pre-Daytona.

In 1963, the brand introduced a manual winding mechanical chronograph watch featuring an external tachymeter bezel made of steel. This timepiece with reference number 6239 established the foundation of the Rolex Daytona collection. Known as Cosmograph, this stainless steel watch was released without the DAYTONA inscription on the dial.

In the mid-1960s, Rolex began capitalizing on DAYTONA name on the dial of Cosmograph to mark the brand’s partnership with the legendary international speedway as its official timekeeper.

Although the world’s first self-winding chronograph was introduced in 1969, Rolex had to wait until 1988 to update Daytona with an automatic calibre. Rolex procured the Zenith “El Primero” 3019PHC calibers and then extensively customized them to create a new calibre family designated Calibre 4030.The second-generation Daytona chronographs are equipped with this self-winding movement.

The first Daytona model to be fitted with the Calibre 4030 was the reference 16520. These Rolex ‘Zenith’ Daytona watches feature a 40 mm diameter case mounted with scratch-resistant sapphire crystal instead of acrylic glass. The watches from the second series can be distinguished from their five-digit reference numbers, for example, 16520 (stainless steel), 16523 (stainless steel and yellow gold), and 16528 (yellow gold).

The Daytonas equipped with the self-winding calibre 4130 belong to the third generation, which uses a six-digit reference number system. The first creation from this series was the reference 116520 Rolex Daytona chronograph, which features a 40mm diameter 904L grade stainless steel case and an engraved metal bezel with a 400 km/hr tachymeter scale. Rolex has been regularly expanding the third series by adding new references in Oystersteel, Bimetal (steel + gold), Gold and Platinum.

The brand has also introduced new versions outfitted with ceramic Cerachrom Tachymeter bezel. Not to forget the gem-set Daytonas that instantly captured the attention of glitterati. The most recently released Rolex Daytona 2021 collection is comprised of meteorite dial versions featuring 18-carat gold cases.

Since its official launch in 1963, the Rolex Daytona collection has been evolved tremendously through three distinct generations and several references. These valuable watches are available in steel, gold, platinum and bi-metal (steel and gold) versions. In this page, we present some iconic references from the world’s most-admired mechanical luxury sports chronograph collection.

The iconic Rolex Daytona paul newman dial watches belong to the first generation. Initially, Daytonas were available with two dial options: White with black counters or Black with white counters. Subsequently, the company introduced the newer dial styles. Among them, the Daytona 6239 with an exotic dial rose to fame due to its connection with the legendary actor and motorsports icon Paul Newman. The other references like 6240, 6241 and 6263 were also offered with the similar design.

These references were also made with standard dials, but in terms of value, the models with Paul Newman style outperform them in the vintage watch market. In 2017, a ‘Paul Newman’ Daytona timepiece once owned by the award-winning Hollywood actor was sold for a record-breaking price of $17,752,500 (Above 138.11 million Hong Kong dollars!) during the Phillips in Association with Bacs & Russo auction in New York.

From the first generation, the other iconic models are: the Paul Newman Daytona 6263 “The Oyster Sotto” and the Rolex Cosmograph Daytona 6263 Oyster Eric Clapton Albino.

This is a historically important timepiece as it is the first Rolex chronograph watch to be equipped with an automatic movement. Introduced in 1988, this best-selling reference laid the foundations of the second generation Daytona. Rolex discontinued the production of 16520 in 1999, just before releasing the third generation references equipped with the in-house developed self-winding movement.

Topped with a sapphire crystal glass, it features a glossy black or white dial. Also known as Zenith Daytona, this stainless steel model is one of the most collectible Daytonas. Depending upon the condition and rarity, its current market price can range from HKD 200,000 to HKD 700,000.

This is the first Daytona to be fitted with the in-house developed self-winding chronograph calibre 4130. Introduced in 2000, this iconic watch features a 40mm diameter stainless steel case, oyster bracelet, screw-down crown and pushers, sapphire crystal glass and metal bezel with engraved tachymeter scale. Available in black or white dial, it is one of the popular modern luxury sports watches. The rolex daytona 116520 has a retail price of about HK$ 282,810 in Hong Kong.

The reference 116515 is the first Rolex Oyster Cosmograph to feature the monobloc black CERACHROM bezel. Introduced in 2011, the model with 18K Everrose gold case and chocolate-color dial with black counters is very much popular.

The 40mm diameter case of this rolex rose gold daytona model radiates an eye-catching warm tone in harmony with the luscious brown color of the dial and the sporty black shades of the counters and ceramic bezel. This model is driven by the new generation self-winding calibre 4130. Available with an alligator strap or an Oysterflex bracelet, the retail price range of the Rolex Daytona chocolate dial watch is approximately HK$ 280,000 – HK$ 395,000.

Introduced in 2013 to mark the 50th anniversary of the Daytona collection, this extremely precious yet super cool watch is the first Oyster model in the Rolex Professional range to be offered with a platinum case. Its case (including crown and pushers) and the oyster style bracelet are made of 950 Platinum. This COSC certified automatic chronograph watch is mounted with a chestnut brown Cerachrom tachymeter bezel. It boasts a stunning ice-blue dial with 18 ct white gold hands and indexes.

Evoking the shade of the bezel, the three sub-dials feature chestnut brown color borders. Like all new generation models, this superlative chronometer houses the calibre 4130 in-house movement. It is one of the most expensive Rolex Daytona Cosmograph models in the present catalogue. Known as Daytona Ice Blue, this reference has a retail price of about HK$ 1,030,560.

The watches with Panda dials are always extremely popular in the market. It traditionally represents a particular chronograph dial style with a white dial and black sub-dials. In the Daytona family, you will find a number of models with this special pattern.

Introduced in 2016, the Reference 116500LN was the first steel Daytona to be fitted with the monobloc black CERACHROM bezel. Driven by the self-winding 4130 movement, this model is presently available in two dial versions: black and white. The white dial version with its black-bordered sub-dials evokes the popular Panda style. Fitted on an oyster style bracelet, this variant also carries the Superlative Chronometer certification redefined by Rolex in 2015. The retail price of this Rolex Daytona Panda watch is approximately 298,560 Hong Kong dollars.

The Rolex Daytona white gold reference 116519 with the ‘Racing Panda’ dial is also a sought-after timepiece.

The term ‘Rainbow’ represents a series of gem-set watches from the Rolex Daytona family. Although not popular among traditionalists, the rainbow models continue to win the hearts of glitterati. Introduced in 2012, these jewellery variants of the iconic chronograph watch feature 40mm diameter gold case and the self-winding calibre 4130.

The Daytona Rainbow references are: 116595 RBOW (18k Everose gold), 116598 RBOW (18k yellow gold) and 116599 RBOW (18K white gold). These watches feature diamond-set case and lugs, and the bezel is adorned baguette-cut sapphires in a multicolor pattern evoking the enchanting beauty of the rainbow.

These high-jewellery watches are counted among the most expensive modern wristwatches. The current market price of a Rolex Daytona Rainbow can fetch above HK$ 3,500,000.

This outstanding model features a 40mm diameter stainless steel case, black dial, oyster bracelet and a black Cerachrom bezel with tachymeter scale. It is a best-selling model in the present catalogue. Equipped with the calibre 4130, this Rolex Daytona Black watch costs about HK$ 262,970 in Hong Kong.

Introduction The Rolex Explorer line has been dedicated to adventurers who explore harsh terrains like mountains, caves and snow-filled Polar Regions. Interestingly, this famed collection was debuted in 1953, the same year that marked the successful conquest of the Mount Everest by Tenzing Norgay and Edmund Hillary. Belong to the Professional range of Rolex, Explorer … Continue reading “Rolex Explorer: History and Buying Guide”

Rolex Submariner: One of The Best Dive Watches

One of the most successful diving watches ever made, the Rolex Submariner enjoys a grand, unrivalled heritage that tracing back to the 1950s. Founded by Hans Wilsdorf in 1905, Rolex has been an industry leader in the manufacturing of water-proof and shock-proof watches. In 1926, the brand introduced Oyster, the first waterproof wristwatch in the … Continue reading “Rolex Submariner: One of The Best Dive Watches”

The Evolution of Rolex Explorer II