Free Shipping on orders over $99. This offer is valid on all our store items.
Search
Recent Posts
Trending Article
5 Iconic Pilot Watches of IWC HK 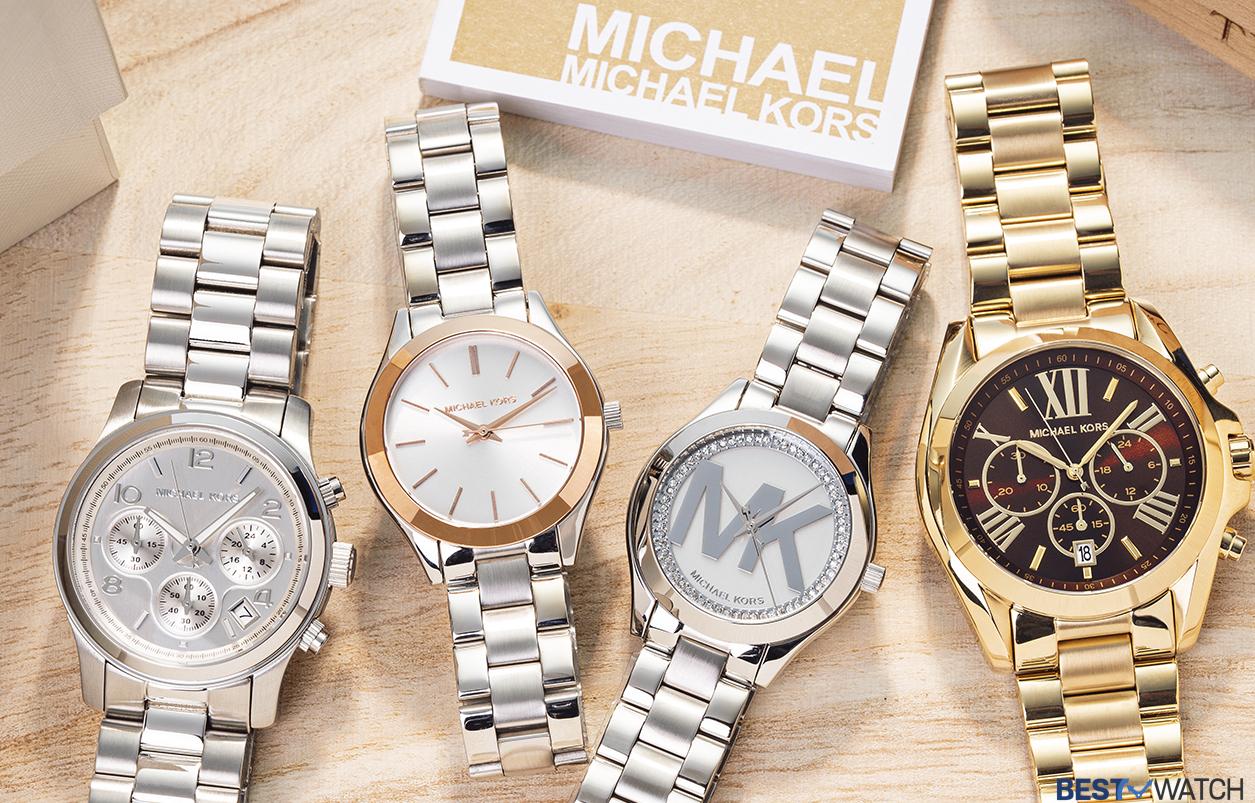 Being well known as an American fashion designer brand, Michael Kors is a house of refined fashion accessories. If you want to stand out from the crowd of fashionistas, Michael Kors watches will surely help you out with that.

The Michael Kors watch family is housing a number of world popular collections such as the Michael Kors Bradshaw, Darci, Lexington and more. You will definitely find the one that suits you the best.

The young and talented designer started his fashion career in the early 1980s and established his own brand in 1983. Although the company went bankrupt in 1993, four years later the brand was relaunched and has kept growing up to this date. Currently, the Michael Kors kingdom has over 1500 stores over the major cities in the world.

The Michael Kors brand has been focusing on ready to wear clothing and fashion accessories. His dull scale line for menswear was introduced in 2001 and the Michael Kors watches for men and women were first released in 2004.

The Launch of Michael Kors Watches

These fashion designer watches hold the best possible quality under its affordable price ranges. They are equipped with stainless steel cases with standard water resistance and are powered by reliable quartz movements. Some luxurious models are bejewelled with Swarovski crystals and mother of pearl dials for the Michael Kors lady’s watches.

Michael Kors has been at the forefront of the fashion industry for a good reason. The brand offers a versatile range of clothing and accessories with exceptional sense and elegance.

Exceeding expectations of the market, the Michael Kors watch collections are available in great diversity and great variety at the range of only HKD 1,000 – 2,000. Among the brand’s popular models, the Michael Kors Lexington and Michael Kors Bradshaw, are offering exceptional timepieces for both men and women. The Michael Kors watches have become an all-time favorite among fashion and watch enthusiasts. Let’s check out some of the most notable MK watches.

The Michael Kors Bradshaw collection represents the brand’s strive for leading the latest trends. Standing out by its sporty and chic look, the Bradshaw Two-Tone Watch MK5976 is regarded as one of the best Michael Kors men’s watches in the family. This watch is encased by a stainless steel case in light gold and silver-white tone. It features a classic navy blue dial with a mixture of Roman numerals and stick indices. On the dial, it has three sub-dials with golden details which are the hour, minute and seconds indicators. As a Michael Kors sporty watch, a date display window is also placed at the 6 o’clock position.

For those who are tech enthusiasts, this reliable digital model of Michael Kors Bradshaw would be a perfect choice. The Michael Kors Smartwatch MKT5012 is equipped with a 45mm case with a 22 mm matching band for a more comfortable fit. This is one of the refined Michael Kors watches men are highly desired for.

The Lexington lineup is one of the Michael Kors men’s watches that offer bulky and tough models.

The Michael Kors Lexington Men’s Chronograph MK8281 is amongst the most classic ones. The whole watch is crafted in a vintage fashion with a golden coloured case and a sunray dial.

If you are looking for something playful and quirky, you may consider the Michael Kors Lexington Chronograph Quartz Blue Men’s Watch MK8480. The whole watch is crafted in a blue tone that the stainless steel case and matching bracelet are in cool silver blue and the dial is in dark blue. The monochromatic watch is the right piece to suit both casual and formal outfits.

The Michael Kors Runway collection is known for its elegant and top-tier design aesthetics. Their watches are made to cater the needs of fashionistas. Most of the models in this collection feature a yellow gold-colored case for a glamorous look. One of its notable models is the Michael Kors Runway MK5473. With a whole yellow gold profile, the watch showcases a large logo on the dial as the main attraction inside the 45 mm large stainless steel case. The straightforward and bold design has attracted much attention from those fashion lovers who are fond of daring designs.

Aiming for perfection, the Michael Kors Camille collection is housing a series of delicate round watches that ladies will truly love and appreciate. Michael Kors watches have been known for its enchanting rose gold versions that both gentlemen and women admire. Among the MK watch lovers’ favorites, the Mini Camille Pavé Two-Tone Watch MK6846 is a highly discussed one. With a relatively small case of 33 mm, the watch has fully made use of the signature Michael Kors rose gold colour with a polished silver-tone dial. The dial is well fitted with the matching rose gold hand and indices, which the 12 hours is displayed in Roman numeral.

The Michael Kors Parker collection is specifically designed for ladies who look for glamour and sparkles. The rose gold Michael Kors MK5781 is one of the best choices. Housing a reliable quartz movement in the stainless steel case, its bezel is embellished with sparkling Swarovski crystals.

Similar to the Michael Kors Parker collection, the Darci lineup is also amongst the best Michael Kors watches for women. It is a Michael Kors watch ladies can stand out with its shimmering design. The Michael Kors Darci Pavé Gold Tone Watch MK4513 model comes with a 34 mm gold-tone stainless steel case. As suggested by its name, this watch is paved with medium-sized precious stones on its topring. This Michael Kors ladies rose gold watch can definitely enhance the feminine look of the wearers.

With a dauntless vibe, the Michael Kors Sofie collection is the best suit for evening and cocktail parties due to its extraordinary and artistic dial designs. The Michael Kors Sofie Quartz Blue Watch MK3971 is one of the best models in the collection. The classic 36 mm gold-tone case features a vibrant blue dial with Roman numeral hour markers for the 6 o’clock and 12 o’clock while leaving the other hours blank. With a whole rose gold profile on the hands, lugs, bracelet and crown, it delivers a fancy and luxury touch for the watch.

Another Sofie model offers a chronograph for the ladies who opt for larger watches or more advanced complications. The Sofie Chronograph Quartz Silver Dial Watch MK6575, featuring a chronograph of 30-minute, 12-hour and 60-second counters, is available for around HKD 1,200 only. This 39 mm stainless steel watch is fitted with a classic white dial and embellished with glamorous crystals. This alluring watch is well crafted in a thin profile that can fit the ladies’ slim wrists.

Demonstrating inimitable style and elegance, the Michael Kors watches have gained a significant amount of fashion followers in these years. Their watches provide a budget-friendly choice for the market while keeping up the distinctive designs and standard quality.

Introduced in 2001, Premier is an extremely successful wristwatch collection from Seiko. This dress watch family has been renowned for neoclassic designs, the unanticipated but synchronized blending of materials, ideas and finishes. It offers both ladies and gents timepieces boasting a classically inspired contemporary style and strong dress appeal. The Premier line frequently derives inspiration … Continue reading “Everything You Need to Know About Seiko Premier Watches”

At present times, people not only use watches to see time but also for various other reasons. Nowadays, social media influencers are sporting watches that are capturing everyone’s attention. This is because they have become a fashion statement for today’s upcoming generation. Below, you will find a list of a few affordable luxury fashion watches … Continue reading “Affordable Luxury Fashion Watches for your OOTD”

Tudor Black Bay: A Guide to One of the Most Reliable Dive Watches

Introduction One of the best-selling diving timepieces in the world, Tudor Black Bay derives its design inspiration from historical dive watches produced by Swiss manufacture. Following the footsteps of Rolex, the company began producing diving watches in the 1950s. In 2012, this incredible legacy was revisited by introducing Black Bay under the Heritage series. Now, … Continue reading “Tudor Black Bay: A Guide to One of the Most Reliable Dive Watches”