Free Shipping on orders over $99. This offer is valid on all our store items.
Search
Recent Posts
Trending Article
The New Launch of Omega Swatch Collaboration Sparks Shopping Frenzy 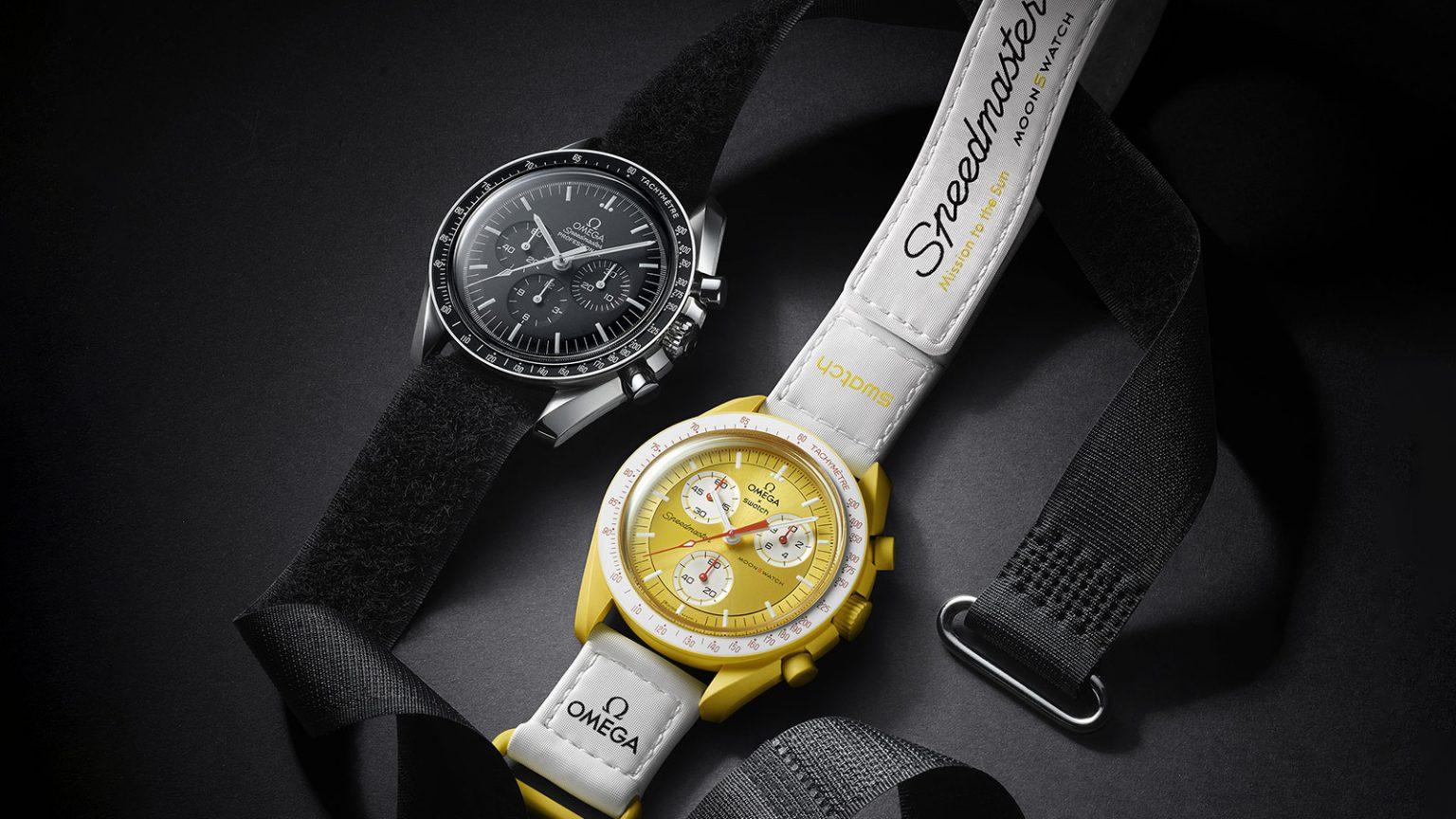 Earlier in March this year, the unexpected cooperation of Omega and Swatch broke the internet and had all the watch lovers in the world over the moon. Actually, it was not something new about watch brands joining hands with other brands, but from the overwhelming responses, it seems that this “OmegaxSwatch” collaboration has taken the brands to the next level.

Ever since its launch, the new models, named MoonSwatch, have stirred the shopping craze over the globe and right now it is very rare to get one at its original price. But why are people so crazy for this collaboration?

Why is this Omega x Swatch Collaboration?

You might have already known that Omega and Swatch are sibling brands under the Swatch Group. Yet it’s still surprising to see something like the prestigious Omega listing with the mass brand Swatch and even releasing its iconic model Speedmaster legitimately at just HKD2,100 stated on the official website. Some critics said that the release of the product is a kind of devaluing the Omega’s brand and the Omega Speedmaster Moonwatch’s name, but some watch enthusiasts also think that Omega has taken a good attempt to draw in a younger crowd, including many of us who can’t currently afford a Speedmaster, are cheering for this unsurreal collaboration.

But why such an unexpected collaboration? To be realistic, overseeing 17 brands including Omega and Swatch, The Swatch Group had been struggling in the past few years with global sales of the watches and fine jewelry industries heavily damaged due to the impact of COVID-19 restrictions. However, eCommerce has been a buffer for the company’s survival to cover its sale reductions at stores. The new models from such collaboration is a great way to garner short-term sales for the Swatch Group and a decent introduction to the mass consumer segment for Omega.

According to the CEO of Swatch Group Nick Hayek, the Group has an iconic luxury brand Omega and its signature Speedmaster while at the same time having that innovative mass watch brand Swatch. As both are worthy partners with the watch legacy for the other, this joint mission turned out to be a massive success and set a milestone to contemporary watch history.

Features of The MoonSwatch

Omega and Swatch are both among the world’s largest watch brands. Their collaboration to create the Omega Swatch MoonSwatch has made so much a hot topic in the market. There are  totally 11 models in the theme of the solar system.

Each watch in the collection is named after the known planets inside our solar system as well as the moon. Amongst these models, the Moon version resembles the original Omega Speedmaster Moonwatch the most while featuring the emblematic tachymeter scale and white hands. The rest models are named under other planets; Mercury, Venus, Earth, Mars, Jupiter, Saturn, Uranus, Neptune, and Pluto. There is also a model named after the sun.

The Omega MoonSwatch features a 42mm case, that is the same size as the legendary Speedmaster with all the details resembling, from the case and bezel details to the subdials. Nevertheless, there are a few differences distinguishable from Omega Speedmaster. Right at the center of the dial, you can clearly find the mark of “Swatch” and “MoonSwatch”. Besides, the setting of the subdials is also different from the original due to the use of quartz movement. The MoonSwatch subdials are evenly placed while the Speedmaster presents the subdials toward the lower half on the dial.

As for the case material, instead of the classic stainless steel, the watch is made from Swatch’s patented bioceramic material. This forward-looking new material is light and environmentally friendly, and at the same time assures the comfortability on your wrist. The bioceramic MoonSwatch collection is equipped with a VELCRO® strap. Moreover, the Super-LumiNova material used on indexes and hands is the same type of that also used on Omega Speedmasters, which ensure high visibility in dark conditions.

What is so Good About The Omega x Swatch MoonSwatch?

Actually, before listing other merits, how does a Speedmaster for HKD2,100 sound? The Omega Speedmaster is an absolute classic piece for every watch collector, but a standard model already costs over HKD20,000. It is a chance of getting a Speedmaster at such an unbelievable price thus to excite a bunch of people from all over the world.

Amongst the 11 MoonSwatch models, each watch is themed on a specific celestial planet in our solar system. The model for the Moon mostly resembles the actual Omega Speedmaster, and other versions are offering all kinds of vibrant cases and designs, just as the iconic Swatch style.

These MoonSwatch timepieces are not limited edition or numbered, that you can purchase anytime at their selected store. (Although they are now all sold out…) What makes the Omega lovers excited the most is their faithful adaptation to the true Speedmaster’s form.

The case size of the watch is 42mm with the thickness of 13mm, and the MoonSwatch also shares the same crystal cover for the case. Besides, using the same Super-LumiNova material, the readability of its chronograph display reaches the level of Omega Speedmaster. On the caseback of each version, there is an engraved specific image of the respective planet, provided directly from NASA.

Carrying the classic Speedmaster features including the emblematic tachymeter scale with dot over 90 design, this Omega x Swatch collaboration brings this legendary Omega chronograph into a more accessible level for the new collectors.

Although the MoonSwatch is not made from robust stainless steel, it is well crafted by Swatch’s patented material called bioceramic. This innovative material is a combination of high-tech ceramic and bio-sourced plastic which is light, scratch resistant and silky to offer comfortability to the wearer. Thus, the bioceramic moonswatch’s cost can be cut down to offer scope for a wider audience who are interested to start their watch collecting journey with an Omega watch.

One of the mainstream collections from Seiko, Prospex offers an extensive selection of sports watches. Offering optimum performance with endurance, they have been perfectly geared to efficiently handle various activities on the sea, on land or in the sky. The present Prospex is the most modern representation of the company’s rich history in creating chronographs, … Continue reading “Seiko Prospex: An Introduction to The Adventure Sports Watch Collection”

Buy A Gucci Watch for Your Her This Valentine’s Day

Introduction St Valentine’s Day has been joyfully celebrated as a grand festival of love and romance all over the world. Many people choose this festive occasion to impress his or her lover with marvelous and unforgettable gifts. Some popular options are chocolates, flowers, fragrances, jewellery, toys and wristwatches. Gifting a wristwatch to your romantic partner … Continue reading “Buy A Gucci Watch for Your Her This Valentine’s Day”

5 Reasons Why you Should own an IWC Watch

Introduction IWC is a prominent watch manufacture based in Schaffhausen, a picturesque town in the German-speaking region of Switzerland. The company was established by the American watchmaker and entrepreneur Florentine Ariosto Jones in 1868. A subsidiary of the Richemont Group since 2000, IWC has been renowned for its high-quality Swiss-made mechanical timepieces, ranging from classic … Continue reading “5 Reasons Why you Should own an IWC Watch”