Free Shipping on orders over $99. This offer is valid on all our store items.
Search
Recent Posts
Trending Article
10 Best-Selling Michael Kors Watches for Men And Women 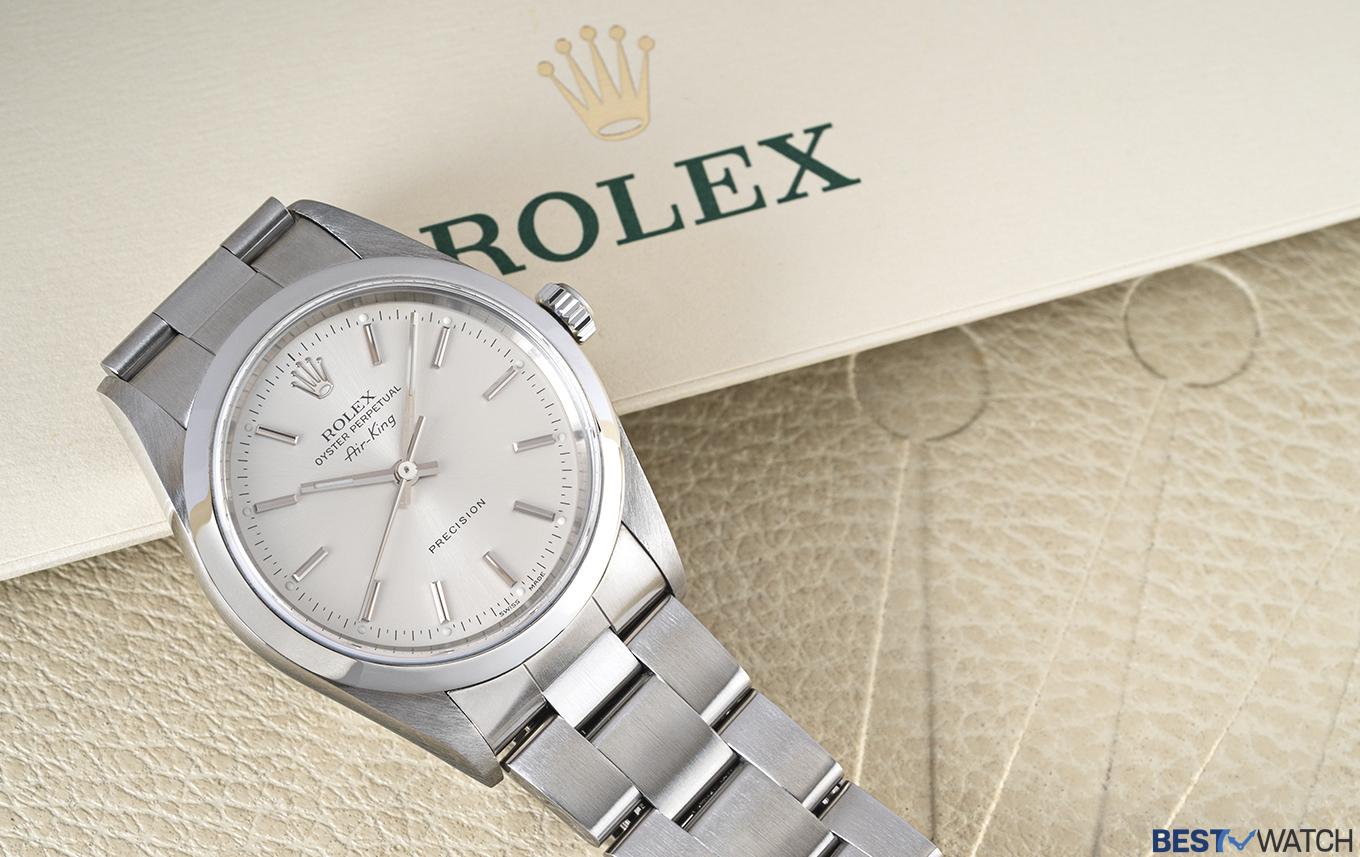 Sometimes the Rolex Air King is somehow less discussed among its other popular fellows in the Rolex family such as the bling bling names Submariner and Daytona. However, many Rolex enthusiasts recommend the Air-King for those who begin to get into the giant Swiss watch brand.

Sharing the brand’s legacy and history, the Rolex Air-King watch is regarded as the best Rolex entry watch for new collectors. Being one of Rolex’s longest running lineups, the Rolex Air King is definitely a watch worthy of your attention. Read on and see how this watch keeps up more than just a Rolex basic watch.

To many watch collectors, the price of the Rolex Air King must be the biggest reason. At the current Rolex catalog, the Air King watch is among the cheapest Rolex watch models. With its comparatively low price marking, the Air King Rolex watch makes an amazing entry point to the world of Rolex.

Despite its lower price tag, its quality and performance sure do not lag behind any other Rolex models. Rolex has been updating this collection with advanced materials and technologies. Its current model is well crafted with the exclusive Oystersteel and scratch-resistant sapphire crystal. The watch is anti-magnetic and water-resistant up to a depth of 100 meters. Furthermore,  the Air King is Rolex Superlative Chronometer as well as COSC certified.

Additionally, this watch is also ideal for watch lovers who are genuinely into its design. The current model Air King 116900 features a drastically updated design from the previous models. This new watch maintains its iconic Air King 369 hour markers while adding the Explorer’s Mercedes hour hand.

The dial is also highlighted with playful coloured details like the bright green colored second hand, the yellow-colored Rolex crown as well as green-colored “Rolex” brand name. The Air King’s dial is a very unique, standout design among others in Rolex’s sport lineup.

Rolex Air King has a deep relationship with the military Air Force. During and after World War II, Rolex released a handful of the “Air” pilot watch models for the British Royal Air Force. The Rolex Air King was released after a series of Air models, the Air Lion, Air Tiger and Air Giant, and outlasted them.

This Rolex pilot watch was first introduced in 1945 with the reference 4925. It features a 34 mm stainless steel case with smooth bezel, a cream dial and Arabic numerals for even hours. The early Air King models all housed a manual wound Hunter movement that was similar to other stainless steel Rolex Oyster models.

As one of Rolex’s oldest watch models still being listed in the catalog, the Air-King has evolved dramatically over its long history while retaining its fundamental style.

This Rolex 5500 Air King watch is considered as a representative vintage Air King model in the current secondary market. It was released in 1957 as the successor of the previous reference 6652 released in 1953. The watch is equipped with a 34 mm stainless steel case, a domed bezel and a matching Oyster steel bracelet. It featured a three-hand creamy silver dial with stick hour markers.

This watch has soon become an iconic model in the collection that is rare and desirable among the vintage watch collectors.

In 1989, Rolex introduced the five-digit Reference 14000 as an update model to the Air King 5500. It was another new approach for the collection after 37 years. This model featured the later-iconic Arabic numerals at the 3-6-9 hour markers, with stick markers in between. This Arabic numeral version had instantly proved popular with customers. It also featured the most advanced Rolex caliber 3000 movement at the time.

There was also a variant with reference 14010 that featured the “engine turned bezel.” At the time the engine turned bezel was a popular alternative for the Rolex lovers who didn’t prefer the flashy fluted bezel that was on many Datejusts models. In 2000, both the Air King 14000 and Air King 14010 were updated with the newer in-house caliber 3130 movement.

In 2007, Rolex replaced the 14000 models with six-digit references, the 114200 models. These new references of Rolex Air-King maintained a 34mm Oystersteel case with the scratch-proof sapphire crystal and a matching Oystersteel bracelet. The robust bracelet was updated to solid end-links. The Air King 114200 was fitted with a smooth bezel while its variants, the Air King 114210 had an engine-turned bezel and the Air King 114234 featured a fluted white gold bezel.

The generation of Rolex Air King was the first models that were COSC certified in the collection. Led by the Rolex 114200, these models are updated with a “Superlative Chronometer Officially Certified” marking on their dials above the 6 o’clock.

After two years of discontinuation, Rolex released a new Air-King Reference 116900 in 2016. At first glance, this Rolex Air King 2016 version obviously varies from the previous models in terms of design aesthetics. Instead of the old 34mm monochromatic Air-King case, this new generation of the Air-King features a larger 40mm Oystersteel case, which is the same case as the Rolex Milgauss 116400. This Rolex 116900 is also powered by the same in-house movement 3131 Caliber with anti-magnetism features with the Milgauss watch.

The brand has placed a relatively playful dial on the new Air King watch. While featuring the iconic large 3-6-9 Arabic numerals, the dial is fitted with a bright green second hand. The brand logo and name is also placed in a bold execution that the Rolex crown logo is enemaled in sharp yellow and “ROLEX” is in green. It has become a standing out characteristic of the Air King model.

No matter if you prefer the simpler classic older models or go for the newest bold model, the Air-King is a great choice as a Rolex entry watch. It’s definitely one of the best solid starter Rolex watches, being lower priced than other sports models in the brand. Holding more than 75 years of history behind it, the Rolex Air King has proven its value and market as an important part of the brand amongst the longest running Rolex collections.

One of the most successful diving watches ever made, the Rolex Submariner enjoys a grand, unrivalled heritage that tracing back to the 1950s. Founded by Hans Wilsdorf in 1905, Rolex has been an industry leader in the manufacturing of water-proof and shock-proof watches. In 1926, the brand introduced Oyster, the first waterproof wristwatch in the … Continue reading “Rolex Submariner: One of The Best Dive Watches”

The Rolex Daytona 116520 has been launched for over 20 years. It has gained massive popularity since its debut in 2000 until its successor Rolex 116500 debuted in 2016. Since then, the steel Daytona 116520 has not only been a precious model that becomes growingly difficult to obtain, but also an icon model among luxury … Continue reading “Rolex Daytona 116520: The Most Popular Luxury Chronograph Watch”

Rolex Daytona is one of the best and most admired mechanical chronograph wristwatches ever made. Primarily created for racing drivers and motorsports professionals, this sports chronograph from the celebrated Swiss watch brand has been considered as a holy grail by seasoned horology enthusiasts. Appropriately named after the famous Daytona Beach City in Florida in the … Continue reading “A Wrist Watch Review – Rolex Daytona Series”